Northwest Partitions is considered one of the best in framing and drywall #contracting in Western Washington. NWP has been a local industry leader since 1982. 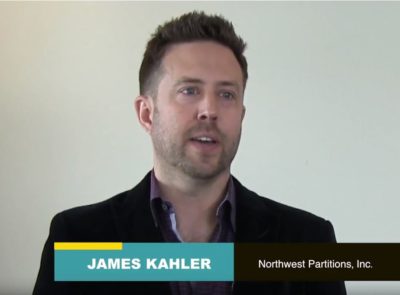 “This conference rises above the rest.  It’s really intimate; it has all the key players in the industry, and there are always some good learning objectives and takeaways.” 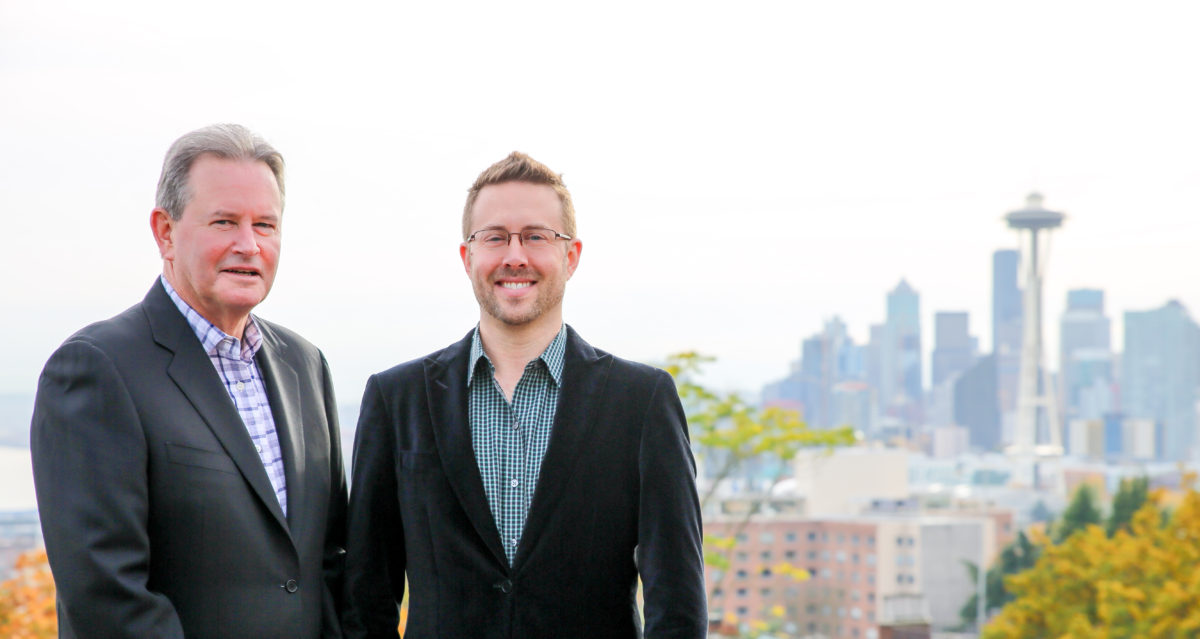 Woodinville, WA (February 2018) – Northwest Partitions, Inc. (NWP), a premier union wall and ceiling contractor, has new ownership in place, but the company will remain in the family as it has been sold to James Kahler, the eldest son of the founder, Rick Kahler.   Rick launched the business in 1982.  He will continue working as a project executive at least through 2019.  James brings more than two decades of relevant industry experience and previously served as NWP’s president.  In addition to his presidency, James was named chief executive officer.

“This is an exciting time for NWP and me personally as the next generation takes the reigns and expands upon NWP’s successes.  The succession plan has been a longtime in the making so I am confident James is poised to seamlessly lead the team to new heights,” said Rick.

“It is still a little surreal as we discussed the sale for over a decade, but not until just recently was the timing finally right for both of us.  It truly is an honor and privilege to continue the family legacy and lead such a great company; a company packed full of amazing talent.  Our future is bright,” said James.

NWP has record backlog, including a nearly $12 million contract at SeaTac Airport’s North Satellite, four major school projects, and numerous other projects for high profile end-users.  NWP recently expanded its services to include a paint division which already secured work.

James earned a bachelor’s degree in Construction Management from University of Washington.  He also currently serves as Board president of the Northwest Wall and Ceiling Contractors Association and trustee of the Western Washington Painters Defined Contribution Pension Trust.

Featured in the Fall/Summer 2013 Edition

Mercer Court is the newest addition to the student-housing complex at the University of Washington’s Seattle campus. It consists of five eight-story buildings on 4.5 acres overlooking Portage Bay.

The placement of the complex was carefully designed to maximize students’ convenience. Each unit is equipped with a living space, kitchen, and combination of private and semi-private restrooms. Amenities include access to the rooftop terrace, community lounge, group study areas, music practice rooms, laundry facilities and the Husky Grind Cafe.

This project’s uniqueness lies in its structure and magnitude. The lower half of each building is constructed of interior and exterior metal-stud walls framed within a three-story concrete podium. The podium supports an additional five floors of wood-framed structure, which required the team to account for shrinkage, axial loading, wood-shear walls, and warped or crowned studs.

The magnitude of this project posed unique challenges in material stocking, jobsite logistics, manpower sequencing and trade stacking. To maintain the schedule, Northwest Partitions had 12 to 15 business days to complete each floor. Just-in-time deliveries allowed different trades to work in adjacent areas. During peak times, more than 100 employees were on the site, requiring extraordinary time management and dedication.

Judge’s comment: “The ability of the construction team to maintain the schedule while achieving outstanding quality is a true accomplishment. The students are fortunate to have this fantastic new housing facility.”

Since 1949, the Husky Union Building has been the center of student life at the University of Washington. It has expanded over the years from 71,000 square feet to 262,000 square feet.

This two-year project reinvented the building to connect the student body, campus and natural environment. It rebuilt meeting rooms, lecture halls, ballrooms, a bowling alley and restaurants. A performance hall anchors the building’s south end, where elliptical sails direct sunlight into the space. Glass roof monitors channel light into other parts of the building.

Since the students voted to pay for most of the renovation themselves through tuition fees, student representatives participated in the design process and development.

Another challenge was adapting to the high volume and speed of necessary changes. Demolition exposed unforeseen mechanical, electrical and plumbing conditions. In all, there were 1,868 requests for information on the project and another 243 additional skill identifiers. Some of these changes had multiple reiterations.

Maintaining the schedule under these conditions took an extraordinary amount of management time and dedication.

Judge’s comment: “The HUB, a ‘home away from home’ for UW students, has been transformed into a wonderful facility that embraces the concepts of new architecture and construction with an existing historic structure. The countless unforeseen conditions were overcome, creating a beautiful finished product.”

Northwest Partitions Inc. (NWP) is one of the most reputable interior and exterior wall and ceiling union contractors in the Northwest. The Washington-based company has built a respected reputation for quality metal stud framing, drywall, fire-stopping, thermal and acoustical insulation service.

“We have established ourselves through repeat business,” explains James Kahler, vice president of NWP. “Relationships are what give us the edge when prices are close on bids; it’s often the difference in landing the job or not. We are always striving to perform better and to keep our clients happy.”

As the second-generation of leadership, James has had a hand in the family company since his father, Rick Kahler, started NWP in 1982. “My father was originally working for a competitor,” reveals James. “He worked his way up from truck driver and stocker to estimator and project manager before moving on to launch his own business.”

James has always been his father’s right-hand man. “I have been involved in the business since I was young,” he recalls. “I worked through the summers while I was in high school before attending the University of Washington where I received my degree in construction management.”
Based in Kent, Wash., NWP serves the western part of Washington State through a union workforce. “Right now, we are at about 100 employees, but that number varies,” shares James. “Since we are a union contractor, we have the ability to scale up and scale down based on our workload.”
NWP is a member of the Master Builders Association (MBA) of King and Snohomish counties. The MBA is the nation’s largest local homebuilders association, serving the greater Seattle area. The company teamed up with the MBA to provide its employees outstanding health insurance while being part of a trusted source for industry professionals.

On Time and On Budget
James says NWP has worked hard to earn its reputation over the years. “Although we keep our prices competitive, we truly focus more on our professional quality work and delivering projects on time and on budget,” he remarks. “We are a very proactive and responsive company to work with. Our goal is to make it easy for the general contractors to get the job done. We have had a lot of positive feedback regarding our level of quality over the years.”

NWP’s jobs range in size and scope, including both public and private work, as well as a significant amount of education-related construction. “The majority of our work is in the commercial sector,” reveals James. “Occasionally we are involved in a high-end residential job; you’ll find these clients on a Forbes richest people list. We also self-perform 99 percent of what we do, ensuring quality construction.”
The company has recently been on the University of Washington (UW) campus, performing several multimillion dollar jobs. “This past fall we wrapped up an 18-month project for UW’s Husky Union Building,” details James. “Out of the $87 million in renovation costs, our contract was about $4 million. It was a complete gut and rebuild while maintaining architecturally significant elements, which made the renovation very challenging, but well worth it at the end of the day.”

NWP’s work on the Husky Union Building won the company an award from the Northwest Wall and Ceiling Bureau. “We found there was a substantial amount of additional work than anticipated, but the start and finish dates were set with little room to budge,” explains James. “We really had to step it up to reach completion.”

Also on the UW campus is the Mercer Court Apartments, which NWP recently completed in June 2013. “This project consisted of five new, eight-story wood and metal framed apartment buildings,” shares James. “Again, we were on a tight schedule, with little time to turn each floor on this $6.5 million contract. The project will allow for 552,000 square feet and 900 beds. At the peak of this job, we had about 100 crew members working simultaneously.”

Relying on Relationships
James reveals NWP has felt the pinch of the economic downturn, but it is the company’s longstanding customer relations that have kept the business a float. “There’s no doubt we have felt the effects of the downturn,” he says. “It’s a highly competitive market in the Seattle area, but we have trimmed our overhead and tried to be more efficient in the office and the field. Our well trained staff and tight project management guidelines have helped, as well, and there’s always a bit of luck.”
As far as NWP is concerned, James is optimistic. “I think we still have a few more years ahead to get back to a more normalized market,” he admits. “It’s hard to compete when your competitors are bidding so far under; I don’t see how they are even making their margins. At the moment we are in hunker down mode and capitalizing on past relationships to get us through.”
James also reveals that NWP is capable of jobs its competitors are not. “There are always projects we know we can land because we will tackle the difficult ones that other companies won’t,” he says. “We continue to focus on becoming a better company; progress is important.” Nonetheless, Northwest Partitions Inc. continues to thrive in Washington by building upon a solid foundation of deep rooted customer relationships.

Woodinville-based Northwest Partitions appointed Rick Kahler as CEO and James Kahler as president. Rick Kahler founded the company in 1982 and had been president since then. James Kahler has more than 20 years of industry experience and served as the company’s vice president since 2004. He holds a bachelor’s degree in construction management from the University of Washington and serves on the boards of several local associations. Rick Kahler remains the sole shareholder of the union wall and ceiling contractor.